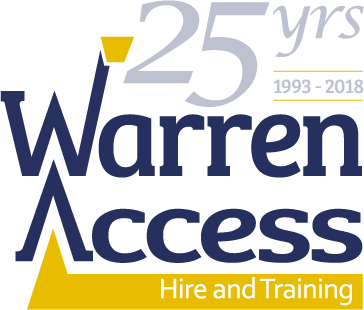 As Warren Access celebrate their 25 year anniversary, it’s time to look back at the journey so far!

It was 1993 when Derek Warren, the founder, launched the company along with his son Graeme, and a lot has happened since. It’s gone from strength to strength, and now has 12 employees, an extensive hire fleet consisting of van and truck mounted platforms, tracked access platforms, scissor lifts, spider lifts and self-propelled booms, two depots and a range of training courses.

Where it all began

Derek left school at 15 and jumped straight into the world of work, taking up a role as Cost Clerk with the National Coal Board Group Offices in Blyth. But, ever-ambitious and wanting more in terms of career progression, he swiftly moved into the construction industry to a Plant Hire Company, initially as a Cost Clerk but then transferring into the hire department and becoming a Hire Representative.

From there, Leslie Marshall, a Director of an ambitious company called Marshall Branson Limited, presented Derek with his next opportunity. He stayed for 28 years, ending up as General Manager of the Plant and Access Division. It was all change in 1993, however, when the company made Derek redundant along with other Managers.

At the age of 53, this was a real blow, as you can imagine, though it didn’t take long for Derek to find his feet again. With the backing and help of his family and taking inspiration from a business course that emphasised the importance of ‘sticking to what you know’, Derek turned his redundancy into an opportunity and founded Warren Access. With all his industry contacts, he got off to a strong start, acquiring two second-hand Acklift van mounted platforms, which went straight out on hire with the local Council. He then built a fleet of up to 12 vehicles over the next few years.

In 2005, as takeover talks took place and the temptation of retirement grew, Derek began talks with his son and daughter-in-law, Graeme and Michelle. After a bit of juggling and house moving, they joined the business full-time and Warren Access Limited was born.

Following soon after was a rebrand and the website launch in 2007. In 2008, the fleet grew, first with the much-in-demand Multitel MX270 then, in 2009, with the 20m Mutlitel MX200. It was also this year that Warren Access became an accredited IPAF training centre.

The company and fleet continued to grow over the next few years, with the addition of more Multitels, a Spiderlift and a 33 m Ruthman. The first full-time member of staff joined the team in 2010 and, in 2013, the Huntingdon depot opened, though the company has recently said goodbye to that building and moved into bigger premises.

Not only did 2018 mark our 25 year anniversary in business, but also Derek finally giving in to the lure of retirement after 13 years of threatening it! The business is now in the capable hands of the younger generation of Warren’s. When asked what he made of the news, Derek’s son Graeme commented: “Our business has been built on looking after clients with honesty and integrity. That’s not going to change, even though Derek has now retired. We wish Derek a happy retirement; he really deserves it, he’s worked so hard to build this company with the right priorities. Our customers and their safety always come first, and we’ll continue to run the business with the same ethos. I’m sure Derek will still pop in now and again, just to check up on us!”

With two celebrations in one: 25 years in business and Derek’s retirement, 2018 has been an exciting year for Warren Access. The team are finishing the year by raising a glass to Derek while looking ahead to another 25 years of success and great service for their customers.

To find out more about Warren Access and how they can help you with your working at height projects and safety training, just get in touch.